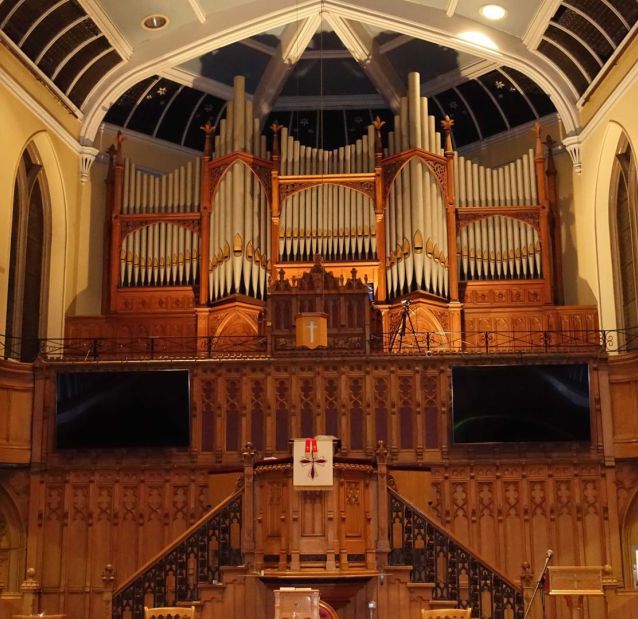 This fine instrument is believed to contain pipework from the original two manual Holt organ first placed in the church in 1865. It was renovated and enlarged by Miller in 1901 and 1929 and by Rushworth & Dreaper in 1972. The organ is an excellent example of the craftsmanship of succeeding builders and restorers and as such is considered an heritage instrument.

It is versatile in tonal range and suitable for a variety of uses. Able to create the quietest sounds suitable for contemplation and prayerful atmosphere, to leading congregational singing or sounding like a cathedral organ in resplendent, celebratory mood!

Repair and replacement of the action is planned and will be undertaken by Nicholson, the international organ building company. This will preserve the organ and bring it to a standard commensurate with the aspirations of the congregation in regular weekly worship and enable it to be used as another concert instrument in the City of Dundee. 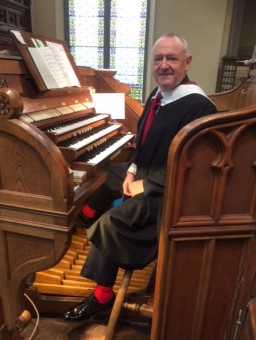 A VERY IMPORTANT REPORT ON THE CURRENT CONDITION

OF OUR VALUED AND PRECIOUS ORGAN

The pipe organ used in weekly worship has pipes dating back to 1865 when the fist organ was installed in Ward Chapel, as the church was then called. It has been upgraded and enlarged since that time with a major overhaul and rebuild in 1901 and 1929 by J R Miller, Dundee organ builders.

The organ has stood the test of time but some of the component parts have deteriorated, mainly leatherwork that allows movement of the wind reservoirs yet keeps them airtight. Some of the transmission and the electric components also need upgrading or renewing and some of the fragile pipes need tender loving care! This is making the consistency of performance less than adequate and to a degree is lessening the ability of the organ and organist to lead worship with vigour. The church forefathers left the organ in our care.

There are few extant J R Miller organs of this size – three manuals (keyboards) and pedals - and as such it is considered worthy of investment by the Kirk Session and also by the new organ tuners, international company, Nicholson Organ Builders, who have undertaken a new contract to service the instrument.

This renovation will cost money and it is for this that an Organ Restoration Fund has been sanctioned by the Kirk Session. I am sure that you will join me in thanking all who have given so willingly and generously already.

In my research on J R Miller pipe organs, I came across this example of Miller’s work in Dundee Congregational Church (ex-Ward Chapel). I asked if I might play it and Jessie Tarbet said “Yes, by all means!” I was taken by the sound of the instrument – I had played a Miller organ in Newport-on-Tay while still a schoolboy. I was also impressed by the scale of the church as I had never been inside even though I had attended High School of Dundee and had my first piano lessons there from a pupil of James Hinchcliffe, Dundee City Organist. Soon after my recent introduction to the organ and the building, the position of organist became vacant. I read about it on the church’s website, applied, was accepted and here I am eight months on!

I am a professional musician – pianist, organist, conductor, educator – attended High School of Dundee and Madras College, St Andrews. I also trained in Glasgow, Rome and Paris. I have conducted many choirs including Dundee Choral Union and have performed in many countries in Europe and the far East and am married to New Zealand soprano, Diana Stuart.   I teach at the Royal Conservatoire of Scotland in all capacities as mentioned above.

I enjoy leading the musical part of Sunday Worship and I also like improvising music to set the atmosphere and mood of our worship. Sometimes this can be joyous and sometimes reflective but every piece I improvise, usually around a hymn tune, is unique and will never be repeated – listen up or you will have missed it! I try to give fifteen minutes of free improvisation before each service begins and trust that many of you can take that time to centre your thoughts and feelings on your beliefs as I use my beliefs to conjure up this spontaneous music leading to our joint worship.

and caring so professionally for every aspect of our worship and fellowship. EMC)

REPORT ON OUR ORGAN FUND-RAISING

more  `in the pipeline` as valuable avenues are opening up for our benefit.   The humbling   generosity of so many who have already given donations both very large and small is indeed a Blessing for Dundee Congregational Church.

on behalf of the Church Trustees